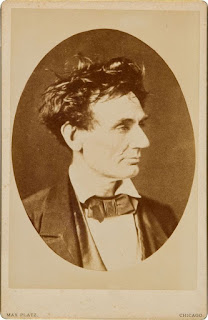 The obverse bust was based on an Alexander  Hersler Photograph taken in the winter of 1857.  It is likely the first time Lincoln "faced a camera since Shepherd posed him in Springfield eleven years earlier" (Ostendorf, Lloyd, Lincoln's Photographs: A Complete Album, Rockwood Press: 1998, pg 7.)  Thanks to Ernie Nagy for this information.

This reverse is most likely the original pairing for this campaign medal and is not found
in combination with any other dies. The following three mulings may have been done
by George H. since these reverse dies are found combined with other dies of his,
and probably dies of his father Robert Sr.

DeWitt AL 1860-34, Cunningham 1-450W, white metal, 31mm
IMAGE NEEDED
This reverse may also be the work of John D. as it is found with the
"I Am Ready" obverse attributed to him and listed as DeWitt C 1861-7
(see below). It is also found in combination with two others dies that I
know of, both by George H. The first is the "Cincinnatus of America" die
(Musante GW-438, Baker 278), the second a very simple design of
a wreath with a blank space in the center.

I suspect both of these pieces were George H. creating rare mulings
as was his custom. Both are found only in the metals above and
very scarce.

There is some disagreement on the 'origin' of this reverse. Sullivan states
that the reverse was originally used on an 1836 Van Buren token (MVB 1836-3)
and later on a Winfield Scott token of 1852 (WS 1852-8). Paul Cunningham
says it was originally used on the Scott token, and notes that H. Joseph Levine's
opinion is that it was prepared for the Lincoln campaign and later
muled with the others. And to add to the confusion it is found in
combination with other dies that have no relation to any campaign!

My opinion is that it is possibly a "generic die" produced by George H.
Lovett that he found useful to use with a variety of other dies, both his
and those by other members of his family. And since this variety is found
only in white metal I think this was a later muling.

Our Next President / Boy and Dog mule,white metal, 31mm

A note in Sullivan reads "The reverse was muled with several other
obverses at later periods" but I think it is obvious this is a
later muling. Although not listed there was a token in a 2013
Stacks Bowers sale with this obverse and a different reverse that
seemed to be the original (see Robert Sr. Political Medalets page).

This token came in the case below and was awarded to
David Sklow for a token display at the 2012 F.U.N Convention

I think this reverse is definitely the work of George H. and was
muled by him with his brother's die,especially since it is
found only in white metal. The sentiment is definitely one that
would be expressed during the Civil War era and could have
been struck then. It is found muled with several other dies
attributable to George H., a few that seem be be completely
unrelated.

DeWitt WS 1852-7, copper, 30.9mm
This would not have been the original reverse for this piece.  They
are found in brass and white metal also.

Sullivan describes this piece as the 'United We Stand' with a blank
reverse.

Rulau list the copper version above, Sullivan mentions the white
metal variety in a note under C 1861-9. Neither mention
a brass variety. The Boy and Dog die is
not the work of the Lovetts but George H. seems to have
obtained it at some point and muled it with several of his dies.